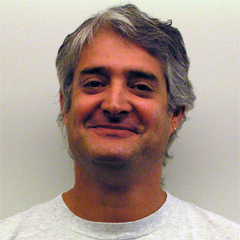 Bruce’s current research involves the development of techniques for the automatic construction and utilization of geometrically accurate and topologically correct models of the human cerebral cortex. These models are based on high-resolution T1-weighted MR images, and have a number of uses. Their primary utility has been as a domain for the visualization of cortical neuroimaging data, as the metric structure of the cortex is significantly more visible when it is viewed as a surface, but they have also been useful as a substrate for combining neuroimaging data from different imaging modalities in order to obtain high spatial and temporal resolution. In addition, Bruce has developed a technique that exploits the correlation between cortical folding patterns and cortical function in order to generate a more accurate mapping across different brains. This high-dimensional nonlinear registration procedure results in a substantial increase in statistical power over more standard methods of inter-subject averaging, and allows the automatic and accurate labeling of many anatomical features of the cortex. While the primary use of the cortical models has been for visualization and more recently high-dimensional inter-subject registration, the models also represent a rich source of information regarding the morphometric properties of the cortex. Another focus of Bruce’s research has been increasing the accuracy of the models of both the gray/white surface as well as the pial surface itself. The combination of these two surfaces allows one to measure the thickness of the gray matter of the cortex. The thickness of the cortical ribbon is of great clinical and research significance as many neurodegenerative diseases result in progressive, regionally specific atrophy of the cortical gray matter. This research has shown that measures of thickness using the cortical models are accurate to within ¼ millimeter, or substantially less than the size of a typical MR voxel.